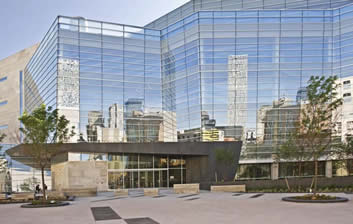 Trautman & Shreve’s involvement in this complex project began during the schematic design phase and continued through commissioning and closeout. As an integral design/ assist partner on the construction team, the company’s in-depth cost- and value-engineering analyses played a significant role in the project’s on-time, within-budget completion and LEED certification. For example, as the team generated design ideas, Trautman & Shreve updated the mechanical/plumbing cost estimates on a real-time basis, while also maintaining the project’s LEED standards.

Once final plans were in place, the company developed the 3-D coordination drawings and collision-detection process that enabled early problem identification. This gave the project team the time it needed to resolve these issues before they could interrupt work in the field.

As construction began, Trautman & Shreve installed the building’s HVAC system, prefabricated the sheet metal, and put in the plumbing systems. Throughout construction, the company’s crews maintained a “clean build” protocol to protect the HVAC system’s integrity according to LEED’s energy-efficiency standards. MERV 13 filtration kept the ductwork as clean as the day it was installed. Finally, Trautman & Shreve performed the final, LEEDmandated building flush-out, assisted in the enhanced commissioning process required for LEED certification, and turned the facility over to the City and County of Denver.

The Denver Justice Center courthouse consists of 35 courtrooms and space for the district attorney, city attorney, clerks of the courts, and public defender, as well as probation offices and temporary inmate holding for both adults and juveniles.

CLIENT:
City and County of Denver