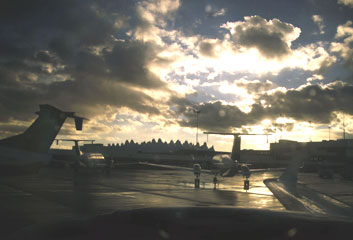 During the mechanical services project's first phase, the company removed and relocated a York 2,500-ton chiller and two 250-horsepower pumps. The HVAC services scope of work called for field assembly of a motor-driven centrifugal compressor, as well as the motor, gear box, evaporator, condenser, intercooler, controls, and panels, including gauges, indicating lights, auxiliary components, and accessories.
During the mechanical construction project's second phase, the company installed a new motor, gear box, starter assembly, controls, control panel, and other devices to retrofit the relocated chiller to an expanded full-load capacity of 3,300 tons. The firm also upgraded existing piping in the central plant complex.

Situated on 34,000 acres or 53 square miles, Denver International Airport is one of the largest airports in the world. From the expansive and beautiful Jeppesen Terminal to Colorado's second largest public art display, it is renowned for aesthetics, aviation safety, customer satisfaction, and passenger convenience. It is the nation's fifth-busiest airport and the 10th-busiest in the world.

To extend the payback of a chiller from another site by relocating it to this facility and upgrading it to meet the facility's increased capacity requirements.

Prior to project startup, Trautman & Shreve provided design, budgeting, and scheduling services, as well as constructability analyses and value mechanical engineering recommendations. During the first phase, the chiller was relocated and returned to operation in 60 days.